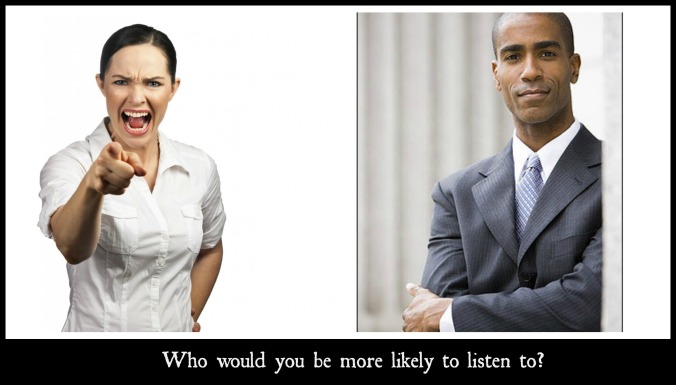 Just as important as what we say is how we say it – and, I venture to add, that how we say things has an even greater impact on our ability to skillfully communicate than the actual words themselves. While this isn’t a new concept for me to consider, what is new is how this method might apply to our current political landscape.

After watching the first presidential debate between Donald Trump and Hillary Clinton a few weeks ago, I was left thinking: Well, I have no way to know who’s right about what information and who’s not, or who’s viewpoints are more accurate. They’re probably both fallible, in some regard. However, I did take notice of how Hilary Clinton’s demeanor, disposition, and energy exchange came through on stage, both while engaged in oration and while listening to her opponent. Assessed solely on the basis of body language and physical character traits, Hilary was the clear winner in the even-temperament-department. Her mannerisms and energy were much more even keeled. In appearance, she seems to possess a greater sense of equanimity, ease, care, and diplomacy, all of which are important to embody as a leader, whether in a government setting or otherwise.

While I tend to lean to the democratic side of the political spectrum, I would consider myself more of a conservative liberal. I hold some values that would resonate more along the republican side of things – and I don’t find it a valuable attribute to cast my vote along party lines simply because someone is a democrat. I think it’s important to intelligently weigh each candidate and decide for myself who I would feel most comfortable with, running whatever office it is they’re up for election in.