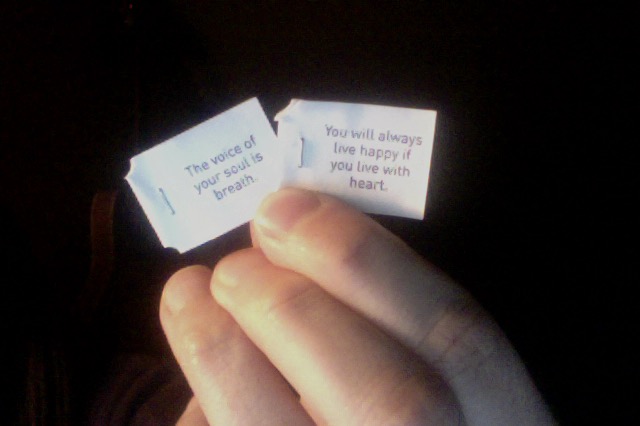 Sooo, this is me awake at midnight thirty, listening to my new favorite musician Ben Howard, the night before my big spoken word show & CD release party. A time when normally I’d have around three hours of slumber under my belt.

It seems I forgot to heed the doc’s warning not to take the steroids prescribed to me for the acute treatment of laryngitis past the hour of 2:00pm.

Welp. I may be running on little to no sleep tomorrow but I should have a voice with which to use for the show, which is kinda important. So there’s that :)

In attempts to combat the pulsing energy of the meds, I’m drinking a cup of herbal tea. The teabag message – tossed overboard like a climbing rope from my mug and currently resting beside my keyboard – reads: You will always live happy if you live with heart. I used to regard teabag messages as rather trite and hokey – but not anymore. We need more positive messages strewn about from teacups the world over. We need em wherever and however we can get em.

Along the thread of messaging, I’ve been making an effort lately to share about my inner workings of fear, centered around the unfolding process of my upcoming show. I think it’s helpful to share this element with others who would otherwise be quick to judge a book by its cover, deeming me as someone who has no qualms whatsoever about getting up on a stage, performing, recording herself in album form, and so on – which is most assuredly not the case.

Earlier today – or, I guess yesterday now technically – I posted this on my personal Facebook page:

With nerves in rising swell preparing for tomorrow night’s big show, the following exchange took place between my husband and I before he went off to work this morning:

Me: Sooo, I’m probably going to be rather a pill until the show tomorrow night. Just sayin. So, I pre-apologize.

Him: What kind of pill?

Me: Like one of those horse pills. The kind that’s unpleasant and hard to swallow.

Me: But if it’s any consolation, I will ALSO practice to infuse some comic relief into the mix, too – so there’s that.

Him: Like a spoonful of sugar to help the medicine go down?

I also hope to inspire others to not let fear run the show, when it comes to, well, really any life pursuit, as this has been a big on-going thread weaving through my own creative, self-expressive journey. I see value in declaring and sharing about myself, as someone who experiences a boat-load of fear, while also being someone who is actively practicing to not let fear run the show.

We all experience fear. It’s not the fear itself that poses difficulties. It’s not even a matter of fear needing to be fixed or corrected. It’s simply a matter of how we relate to it that determines the outcome of how it manifests in our lives. Under certain conditions, feelings of fear can be a call to taking more skillful and heartfull action.

I’m choosing to use all of the fear that I have up around doing this show and putting out this album – 17 hours from now! – as my call to action. I even chat out loud with the fear when it rides high, as I shared in my blog post dated on February 27th, entitled Hello Fear:

Hello fear.
How’s it goin’ buddy?
Okay. Here’s the deal.
You can stay in the car – ya know, the car being a metaphor for myself – but I’m not giving you the keys.
You can kick it in the backseat.
You can even act like a 2-year-old and throw a fit, if you’d like.
I’ll even let you ride shotgun once in a while.
But like, you’re totally NOT driving, is what I’m saying.
End of discussion.
So you might as well quit asking.

In realizing that I wanted to save the teabag message I mentioned at the start of this post, I went to retrieve it from the trashcan, just a few moments ago, and discovered another teabag message from earlier in the evening, that I hadn’t even read at the time, which states: The voice of your soul is breath. These two messages seem rather fitting in support of my big undertaking coming up tonight.

Thanks for the love, Yogi tea. I’m soaking up all I can.

One thought on “Awake at Midnight Thirty”