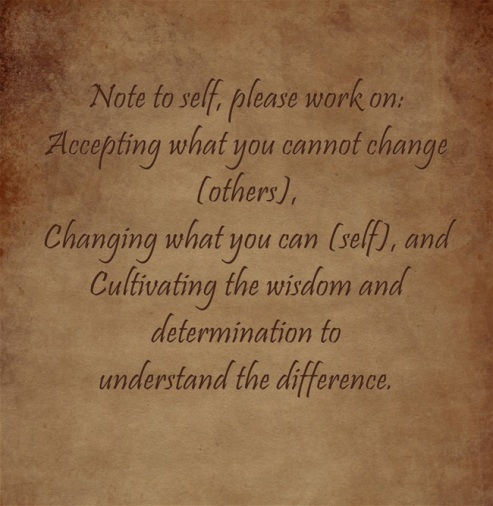 This is me crafting a response to a friend that I thought might prove helpful to post here as well. Recently, a friend approached me inquiring about how I was able to manage the ability to stop trying to control my husband. She had spoken to my husband, Mike, and learned that one of the components in his journey of getting clean and sober 5 years ago, while simultaneously healing from a long bout of depression, involved the work I was doing on myself, centered around, among other things, letting go of being so controlling.

With the crucial support of Alanon (a 12-step group aimed at helping people who have loved ones struggling with addiction), I was able to learn a key element in regards to how to cultivate my own sense of deep-rooted joy and happiness, which was to detach from Mike with love. Detaching with love was an alien concept at first. I was clumsy around it and fumbled with it for a while as I tried to understand what it meant, in a real-life application sort of way. But I slowly started to figure it out, using a slightly adapted version of the Serenity Prayer as a guiding principle along the way (see my own re-worded iteration above).

It is my opinion that most of us do not really and truly know that we are not in the position to change other people. I think we have an intellectual grasp that we cannot change others, but when it comes down to it, we think we’re right and others are wrong on a routine basis. And as long as we think our way of doing things is the right way –  maybe even the ONLY way – then we will continue to try to assert control over others, especially those closest to us, in an effort to get them to change.

5 years ago, the work I was doing on myself could be summed up with this statement: I was learning how to take responsibility for the quality of my own well-being. One of the biggest pieces of doing this work involved coming to see how much I heaped the quality of my well-being onto Mike. How oftentimes my mood depended on his. How I allowed his actions to affect my attitude and outlook. I came to see that as long as my mood, disposition, attitude, and outlook relied on his, I was powerless. If I was needing him to be a certain way in order for me to be a certain way, I was going to be miserable, and stay that way.

I’ll take the issue of cleanliness, as an easy and workable example. I am someone who greatly appreciates, and on some level really needs, a sense of spacial orderliness and cleanliness. However, one look through the window into his truck cab, and you would clearly see that my husband could care less about such things. I spent years and years being the sort of wife who mastered the common and destructive patterns of being passive-aggressive: huffing and puffing my way around him picking up dishes and dirty clothes, stomping around on my way to take out the trash or mow the lawn, and washing dishes or cleaning the house with the manic energy of the Tasmanian Devil. And, of course, no master passive-aggressive would be complete without having their own well-cultivated Tone of Voice, indicating to those that know them best to Watch the F*** Out. I remember my mom’s Tone of Voice while growing up. Like mother like daughter.

What I eventually was able to piece together was that it was highly unlikely that Mike was ever going to become invested in cleanliness and being well-organized on the home front. The chances of him suddenly regarding a clean and orderly house in the same fashion as I do is on par with the chances of me delighting in the sci-fi shows and fantasy audio books he gets so enraptured in. It just ain’t gonna happen.

So, since it was unlikely for him to just start being a neat and organized person AND having a neat and organized home space was important to me, I decided to detach with love, which meant I took on the same tasks as I’d been doing for the past 10 years, only I did them with a different attitude – it really can be as simple as that. Instead of focusing on all of the things he wasn’t doing around the house, I focused on all the ways he contributed. Instead of cleaning the house in a snit, I practiced cleaning with the spirit of enjoyment – our attitude really is something we actively practice. Instead of continuing to think that my way of doing things was right and his was wrong, I practiced looking deeply into how our differences complimented one another. When we are mired in a challenge with another person, developing more understanding is always in order. We cannot love someone fully if we do not practice continually deepening our understanding of them. 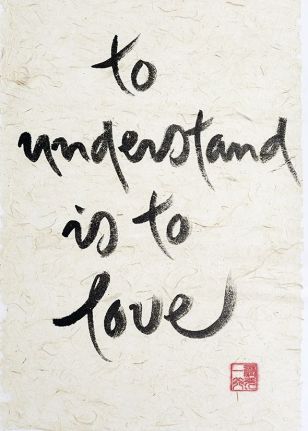 The heart of the work I was doing 5 years ago centered around becoming more focused on understanding, accepting, and embracing who I was, which allowed me to understand, accept, and embrace Mike more for who he was. The more energy and attention I put into my own practice of mindfulness and growth and healing work, the more it allowed the space for Mike to do his work.

Over the past few years I’ve devoted diligent practice into cultivating my own joy and happiness – into taking back the responsibility that I have in every moment to choose how to live and be. It’s NEVER someone else’s work to do if I’m feeling agitated or upset or discontent. The work is ALWAYS mine to do. And while this can feel like a daunting prospect when we’re just starting out, this basic truth is what sets us free, because it means the power to live a good life is in our hands – and really, we’re the only ones who can make it happen.