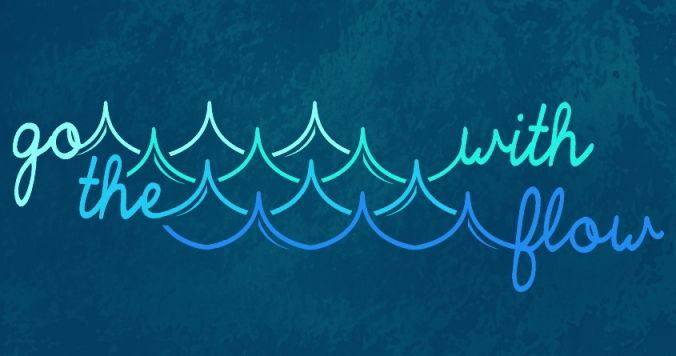 I nanny part-time for two little boys. Yesterday we were all playing with some sticker boards, each depicting different landscapes with associating reusable stickers to place around them. There were boards and stickers to create an ocean, jungle, safari, farm and a prehistoric themed scene. We were looking at the under water ocean board, filled with a large host of sea life stickers, when I pointed to a small bat and said, light-heartedly, “Hey! What’s that bat doing in the ocean?!” Without missing a beat the oldest one, Finn, who’s soon to turn 3, said, very matter-of-factly, “That’s an ocean bat.” When I inquired further, about this fabled creature I had never heard about, he added that he had seen one in person the day before, in New Jersey. As the stickers were all cartoonish in nature the bat in question had purple ears. Finn then went on to say how bats that were pink lived out of the water but purple ones were most assuredly known as “purple ocean bats.” Not wanting to dissuade his lively imagination I simply smiled and nodded along, enjoying the creative story he had made up on the spot.

I offer this jovial account to help depict one of the fruits that develops as a result of the practice of sitting meditation: learning how to go with the flow. Of course, I’m not suggesting we come up with tall tales in order to make sense of things – in fact, I’d strongly warn against that – but we can learn how to creatively adapt to ever changing circumstances as they unfold, weaving a new story to help us move forward. The practice of sitting meditation can greatly aide us in these efforts.

When boiled down, sitting meditation can be described as a good way to become an observer of life. When we practice meditation we’re learning how to be with ourselves, just as we are, and to observe the nature of our thoughts that drift in and out. That’s why it’s often very challenging to do it. Most of us haven’t learned how to keep good company with our own person. Most of us live in a constant stream of self-judgement and condemnation, especially towards what arises in our mental landscape. When we’re able to develop our powers of observation we gain much needed perspective, which allows us to move through life with more ease.

It’s important to clarify that an observer simply sees, watches, and notices things. Observations don’t involve judgements, critiques, or opinionated commentary. Meditation involves sitting on the banks of the river of our thoughts and watching them flow right on by. Relatively speaking, if we are able to become an observer of our own minds everything else is a piece of cake.

Years ago I let go of the grand notion that the goal of sitting meditation was to make it to the point where I could sit for a 20- minute stretch without a single thought arising. While maybe a select few can accomplish this I don’t feel it’s a realistic ambition to set, and it certainly doesn’t benefit our efforts, especially when we’re first starting out. This morning, during the course of my 30-minute sit, my mind visited many different places. In-between fleeting moments of deep, mindful breathing my thoughts drifted from the day’s to-do list to meal plan ideas for tomorrow night’s dinner we’re hosting for some new friends to our upcoming spring retreat to agenda items for our sangha council meeting happening this Sunday. The main difference in the quality of my sitting meditation now, verses when I started 14 years ago, can be whittled down to this: I’ve stopped fighting with myself. When we stop fighting with ourselves, with the thoughts that arise, and the stories generated based on those thoughts, we start venturing into observer status and can begin to casually hang out on the banks of our internal river of mental activity. When we can do this with ourselves we can then apply our skill to other outside occurrences so that when something unexpected happens we know how to adapt and move on, rather than getting stuck and mired in fighting against the flow of life.

When we’re sitting on the banks of an actual river and we see a small log float downstream we probably don’t form an inner dialog about how it shouldn’t be in the water and how disrupting it is to the flow of the river. Most likely we’re simply observing, “Oh, there’s a log floating in the river,” before going about our merry way. Sitting meditation has the potential to be this way as well. “Oh, I’m thinking about what to make for dinner tomorrow night,” or , “Oh, I’m thinking about purple ocean bats that live in New Jersey.” This may sound like unsubstantial progress but it’s actually a sign of great wisdom and insight. When we become an observer of our self we gain the necessary spaciousness to experience the freedom to connect with understanding, open-heartedness and equanimity to everything that unfolds around us.