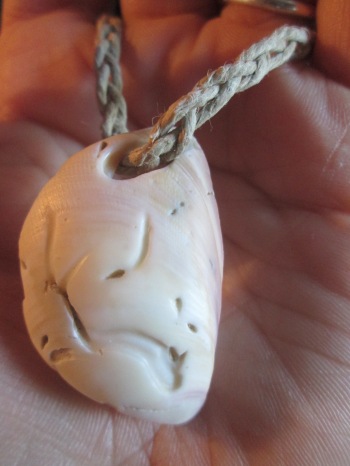 This little shell necklace picture above may not look like much.  It’s as simple as it looks: a shell dangled from a braided hemp rope.  What makes this picture interesting, to me, is that I’m holding it and not wearing it.  Let me explain.

When I was in high school, in my junior year I think it was, I went on a vacation with my dad and stepmom to Sanibel Island in Florida on the Gulf coast.  My uncle owned a condo right on the water.  I found the shell while taking an evening stroll on the beach one night.  Seeing the natural hole in it made it an obvious choice to turn it into a necklace.  Although I had never been a big jewelry wearer previously nor was I a devoted lover of shells (I mean, they’re great and all but I’m more of a rock gal) I proceeded to wear the necklace everyday….for the next 19 years.

A few days ago my hemp cord broke.  I immediately made a new one but I had to wait to tie it on until my husband could give me a hand, as I was having trouble knotting it on my own.  He got in a little late that night from his men’s group and I was asleep when he got home.  I did, however, groggily wake up when he got in and my thoughts went right to my necklace.  I even mentioned having him put it on me in my half-awake state but he easily talked me out of it.  He suggested instead to tie it around my neck the next morning before I went to work.  In almost 20 years I’ve only gone a couple of hours at most without wearing the shell necklace, and it was only lag time while I waited to replace a broken cord (maybe once every 2-3 years).  I never took it off – and when I say never I’m not being dramatic, I mean never.

But the next morning, while the necklace sat dutifully on my nightstand on its new hemp cord, I decided not to put it on.  “Maybe,” I pondered, “I should see what happens if I don’t wear it.”  A new paradigm!  This shell necklace has been with me through thick and thin, accompanied me on all my travels, provided solace during difficult times, and is featured in every picture ever taken of me in the past 20 years.  When I would get nervous or upset I would rub the shell like a wishing stone, drawing on its smooth, solid form and natural soothing energy.  All of my best moments are within the heart and soul of that shell.  Tears well up in my eyes even now as I type just thinking about my faithful shell companion.  It became part of me.  We were interconnected, inseparable.

Its been 4 days since my cord broke and the shell still dangles from the freshly braided hemp rope next to my bed.  I’m not sure whether I’ll put it back on or leave it off for a while, maybe for good.  When I look in the mirror my neck has never looked so elongated and bare.  I miss the shell and I also don’t miss the shell.  Sometimes we hold on and sometimes we let go.  And sometimes we do both at the same time.