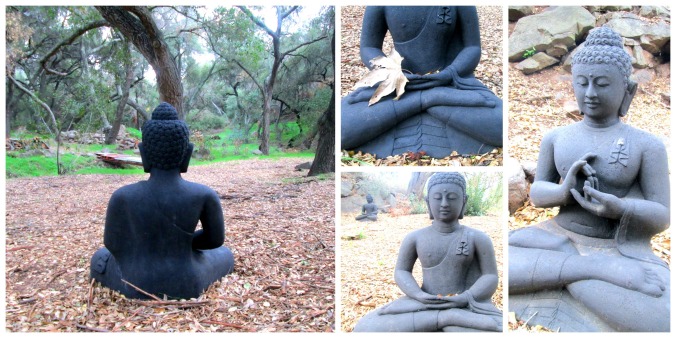 (NOTES: Here is some lingo info that may be helpful in reading these posts.  Deer Park Monastery is in the tradition of Zen Master Thich Nhat Hanh, who is often referred to as Thay.  The monks who reside at Deer Park are called Brothers and the nuns are called Sisters.  The sisters reside in Clarity Hamlet and the brothers reside in Solidity Hamlet, about a 5-10 minute walk apart.  The word hamlet comes from the french and means small village.  While they are not really villages they are self-containing communities.  The visitors who come to stay at the monastery, like myself and Mike, are often called lay friends.)

Written in my journal this morning:

Last night as I walked back to my hut the air was so lovely.  It reminded of when I once went swimming in the ocean late one summer night when I was a teenager.  The water was a warm cool bath, still and serene – I felt safe and content and free.  I have had a lot of those types of moments here at Deer Park already since I arrived yesterday.  Moments that submerge you, encompass your senses, and penetrate so deeply that the present moment becomes alive and tangible.

Yesterday when I saw the 6 new seated buddha statues (pics above) in the oak grove their beauty illuminated me, when I first heard the sound of the bell at the start of meditation and the accompanying song one of the sisters sang I was filled with shivers as they washed over me, the sweet smell of the air, the sound of the crickets, owls, and ravens, the moon’s loving gaze – it is all here as I return to Deer Park.  My gratitude is immeasurable. 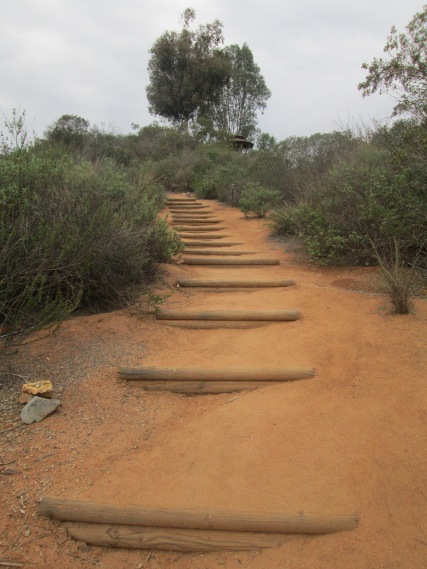 Steps up to the large meditation hall

I feel as though I’ve been able to step almost right back into the retreat from the last time I was here last January.  Having gone through the same schedule set up for a month last year and having been able to spend such quality time here makes this place feel much more like home now.

Last night I found that when I started eating my meal at dinner I picked up my fork and began eating with my left hand, my non-dominant hand.  My last time here I made a conscious effort to eat with my left hand as a mindfulness exercise and while I do practice it from time to time on my own at home I haven’t done it in a long while.  So I found it very interesting to come here and right away start eating with my left without applying any effort or thought to it.  It was a natural response to use my left hand, which I only noticed after taking a few bites of food.

I slept well last night, albeit a little cold this morning from our heater not having been turned on.  I’ve said it before and I’ll say it again: ear plugs are a must while on retreat.  I used to think it was somewhat silly that ear plugs were in bold type on What to Bring on retreat lists – I’m not sure why I ever doubted that expertise.  I suppose if you’re a sound sleeper it doesn’t matter – ya know, one of those people who can sleep through air raid sirens or booming thunderstorms – but I am not one of those people so ear plugs are awesome. 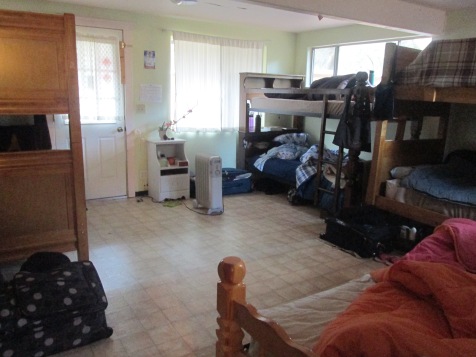 At the moment I have 4 roommates, 2 of which are here for the whole 3-month retreat, 1 is here just for the weekend, and the other one is here for the week.  There are about 30 of us in total here in Clarity Hamlet (including the sisters) and about the same number in Solidity Hamlet where Mike is staying.

This morning I awoke around 4:00am but was nudged back to sleep due to my reluctance to brave the cold outside of my sleeping bag.  Around 4:30 I got up and readied myself for the day.  As my roommates were sleeping I quietly moved about our small one-room hut.  I very much enjoy the dark early morning time here – the moon is so bright and lovely and the air is sweet and cool.  I set out a few minutes later (as it doesn’t take much for me to get ready in the morning) and headed to the dining hall to write.  The large temple bell began to sound around 5:00am and one of the brothers sang out the morning chants.

I ascended the steep stairs to the meditation hall around 5:30am, feeling as the air changed in temperature as I climbed.  You can also take the road to the meditation hall but I prefer the steps carved into the landscaped hillside.  There are around 95 steps and when you turn around about 1/2 way up you can see the city lights popping up between the mountains.

After a 45-minute sitting meditation we had a sutra service and then I joined some others for stick exercise led by Brother Phap De outside.  Breakfast was at 7:30 followed by work meditation at 8:45.  I volunteered to help one of the sisters clean the walk-in cooler.  First she had me prepare some guavas for making into a smoothie while she readied the cooler for us to work.  So I set to peeling, de-seeding, and cutting up the basket of fruit, which was enjoyable and time-consuming.  Then I helped to wash some storing bins from the cooler, sort out produce, and organize the veggies.  There were bins of fresh tomatoes, red and green peppers, carrots, broccoli, cauliflower, potatoes, lettuce, mushrooms, daikon, and cartons of tofu occupying the cooler.  I worked until just before walking meditation started at 11:30 and then set out on a slow walk with some of the sisters and the friends staying here in Clarity Hamlet.  We were led around the main dirt parking lot and then up the fire road overlooking the monastery grounds, where we could see the new construction project taking shape (which I checked out yesterday afternoon after the workers left for the day), the main meditation hall and some of the buildings in the brothers hamlet.  You can also see little bits of the sister’s hamlet peeking out from the trees but it’s pretty covered down here so you can’t see much.

After the walking meditation I was very tired and not very hungry so I skipped lunch and headed back to my hut to lie down.  I napped for an hour and a half or so.  One of the ailments I have is neck and back pain.  I diligently see a chiropractor back home and am so grateful for him to the point of when I leave town for an extended period of time I often wonder how I will get by without him.  I was thinking this very thing earlier today when my neck and shoulder were very painful.  I can sometimes go for long stretches where I don’t require adjustments more than once a month or so but right now I am in one of those periods where I need to go at least once a week due to pains that have arisen.  Fortunately one of the friends here had ibuprofen that I was able to get soon after I woke up from my nap and that helped a great deal.  With less pain I was then able to enjoy the next activity more fully which was to meet in the big meditation hall to watch a dharma talk video from Thay.  This is also when I had the chance to see Mike for the first time since we arrived yesterday afternoon, since he is not an early riser and was not at the morning sit.  It was a great joy to see him :)  It’s nice to have the chance to be a part and miss one another sometimes and it’s comforting to know that he is here practicing just up the hill.

Thay’s talk that we watched was from June 17th, 2014 during the 21-day retreat, which was entitled: What Happens When we Die?  Here are some notes I took during the talk:

To answer the question, “What Happens When we Die?” we must look with the eyes of signlessness.  We have to recognize the cloud in the tea.  We have to train ourselves in the way we’re looking so we can see in such a way that we are not caught in appearances.  When we look deeply there is no separation, no birth and no death, no being and non-being.  Birth and death are important notions and are useful in the realm of conventional truth but there is another dimension, the ultimate dimension where there are no notions of birth and death.

We use the wisdom of adaptation to skillfully use these insights to connect the two truths:  the conventional and the ultimate dimensions.

I will never die.  It is impossible for Thay to die.  I continue always.  Thay is in you.

The shortest answer to the question, “What Happens When you Die?” is: you don’t die.

After the talk Mike and I had some free time before dinner in our hamlets so we talked for a little while by the big bell, after I met a couple of his roommates.  It was nice to sit together and talk.  We parted ways for dinner and we’ll now be joining together again in the big hall for a blessing ceremony for Thay.  The bell is sounding and it is time to go. 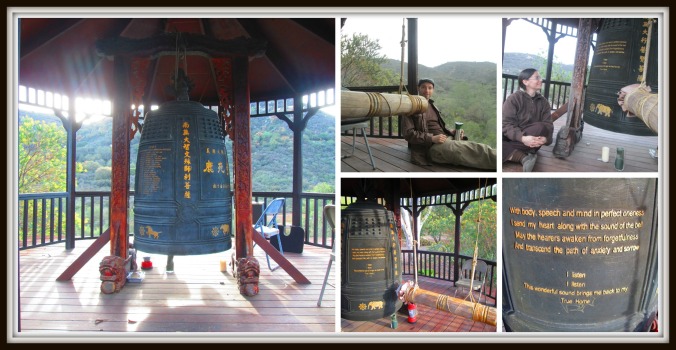